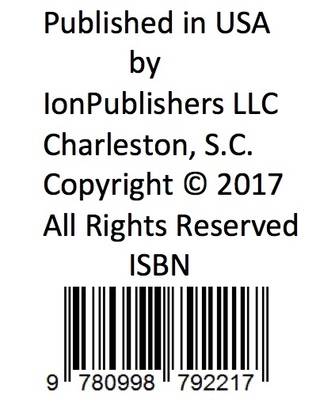 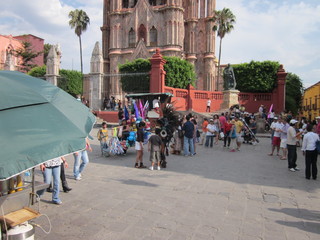 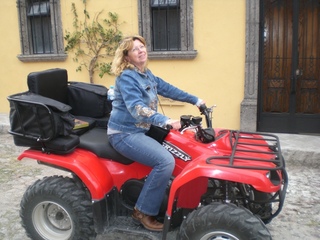 Alice Needs a basket for Tuffy and Munchie! 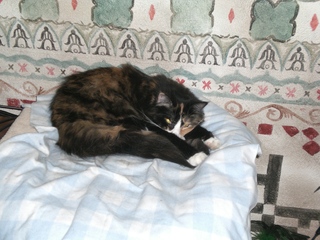 Are you looking at me? Munchie the Terror 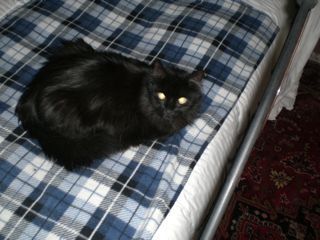 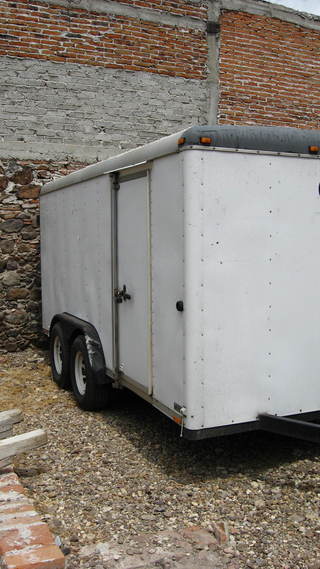 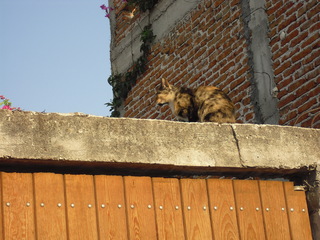 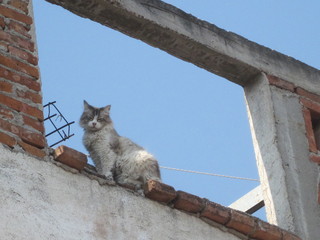 Cats never buy in San Miguel. They only rent.

"A highly entertaining, charming romance story with adorable cats and unusual characters so real they spring right out of the page!
Patterson masterfully weaves humor, love, tragedy, and delicious dining into a unique, heartwarming memoir which will delight readers from the first page.
A very enjoyable read!" - NY Literary Magazine, July 7, 2017 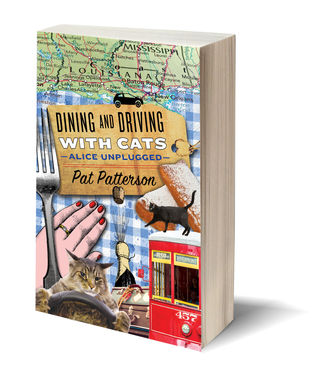 5.0 out of 5 Stars - Distracted Driving to Gastronomic Destinations

"Dining and Driving with Cats - Alice Unplugged", by Pat Patterson, could as easily have been titled An Ode to Alice--or--An Ode to Gastronomy. The author could wax as poetic over exotic and very expensive dishes, maybe more so, than Alice at times, but it was a toss-up as to who won. I guess the answer is that we did, as neither you nor I will likely ever indulge in a Boudin from the "Boudin Capital of the World." Most of us will never have the kind of money this successful ex-D.C. executive Alice and her loving hubby can spend to experience a road trip from San Miguel de Allende in the foothills of central Mexico, filled with the kind of dining experiences that Pat describes in effusive, glowing descriptions. Indeed, the dissertation on bourbon alone might be worth the price of the book for some aficionados. Alice has mapped out a route into the U.S. where they will visit exclusive and well-known restaurants, bistros, pop-ups, landmarks, and friends of note along the way. They do all this in a Honda Fit with two cats, their fat-bottomed girl, Tuffy, and a wily Maine Coon, Munchie, whom Alice has insisted they bring along. From Gautreau's to Clancy's, no exotic restaurant, their premier menu or dish is overlooked. Detailed arguments comparing a dish from one restaurant to the same of another restaurant ensue in which the reader is finally given their considered opinion. (And with their world-wide sampling [including Paris] of the finest, should probably be given considerable weight.) There are even recipes included, of which I hope to try and duplicate one or two at least once, albeit with a few more affordable substitutions. (I can hear Pat heaving a heavy sign and crying "nooooo"--[sorry] but remember--my budget isn't as broad as yours.) As if driving with one or two dogs wouldn't be adventure enough, a road trip with two free-roaming kitties should probably have been termed distracted driving. Alice, however, at most times seemed to have the situation in hand--except for one or two notable exceptions resulting in hilarious adventures. In the meantime, we are given insight into how this unusual relationship came to be, evolved, and gradually, at the end revealed in a secret you didn't see coming. What, you say? A twist in a dining dialogue? Yes! And you'll just have to read it for yourself. The links included in the manuscript worked just fine in my cell phone, and when I saw a link destination that interested me, did not hesitate to click for additional info. My problem was with the kitties being allowed not only in the restaurant, but sampling exquisite cuisine. Having set your mouth up for the taste of a particular dish only to discover it was being shared with a cat almost had me sputtering. Still, this was one travelogue you likely won't experience again--until the second in the series is released! If you love your kitties, love food, or enjoy traveling--don't miss the first. Highly recommended even if your summer is a Staycation, then enjoy the trip vicariously. Go to www.rosepointpublishing.com for the full review.

Alice is a real life brainy, successful business woman. Today she lives in San Miguel de Allende a small cathedral town high in the Central Mexican foothills. For over thirty years she lived in Washington D.C.. When she was fresh out of grad school and managing her firm’s D.C. office she captured the heart of a young man who came in from the rain. He fell hard. He pursued her. She said no –she told him she had cats. What she didn’t tell him was that she also had a secret. Over thirty years have passed since Alice revealed her secret. The young man is no longer young but he still pursues her. She calls him hubby.
&nbspNow sharing a dream home in San Miguel with their two cats Alice suggests they embark on a road trip from Mexico to Blowing Rock, N.C. in the Blue Ridge mountains. Alice insists the two cats Munchie and Tuffy must ride along. Hubby resists. Alice seduces him with a promise. She promises to buy him the perfect vehicle for the trip. He dreams of a Suburban SUV like the ones on CSI Miami and Criminal Minds or maybe a Ford Platinum F-150 4 Door Supercab like the one Mark Wahlberg and Hugh Jackman drive. Alice surprises with a Japanese sub-compact. She buys him a Honda Fit.
The reader joins the foursome as an intimate passenger on the first leg of the journey from the Mexican border to Atlanta, Georgia. If you come along you will dine on scrumptious creations from America’s most acclaimed chefs from Austin and New Orleans to the Procope and Odeon Relais at Buci Market in Paris. You will laugh at cats stuck in boxes, cry over destruction beyond imagination, fight with a Pirate, terrify a US Vice-President, learn cat smuggling, thrill with a love that wouldn’t die, and learn how the Other Woman persuaded Alice to accept my ring. So what’s keeping you? Hop in ‘cause these cats don’t bite. Besides, The Get In Here and Eat pop-up food truck is waiting just up the Austin highway. 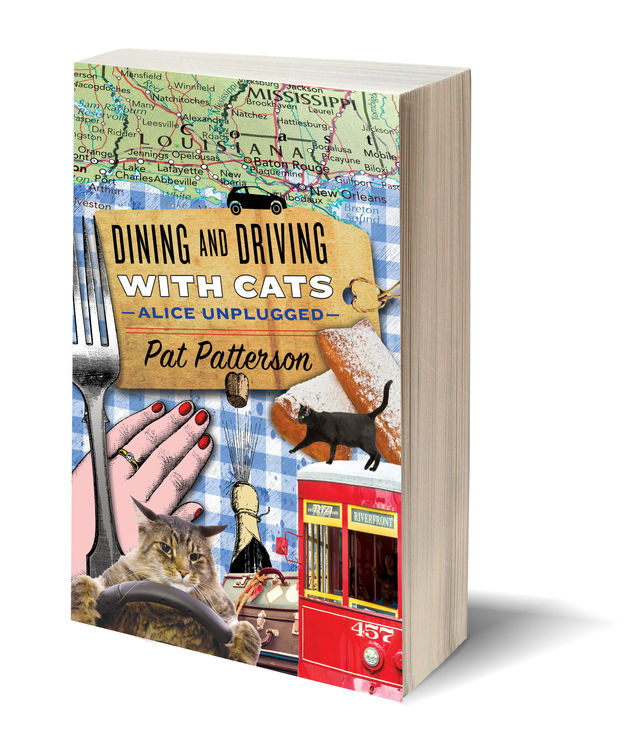 Chapter 1: In the Beginning Was the Plan
“What sort of philosophers are we, who know absolutely nothing about the origin and destiny of cats.”   &nbspHenry David Thoreau
Alice and I were living in the small cathedral town of San Miguel de Allende, high in the foothills of central Mexico. Did I say San Miguel was a small town? Compared to Washington, D.C., our home for the previous 22 years, San Miguel was more like an upscale Latino neighborhood. But it was an unusual neighborhood. No other community its size featured a towering, pink limestone Gothic cathedral with Magic Kingdom castle-like spires pirouetting hundreds of feet above the cobblestone streets and tourist shops below. This distinguishing landmark was known as the Parroquia and it means different things to different people....
In addition to housing a stunning cathedral, the little burg overflowed with stores selling Mexican handicrafts, clothing boutiques, fine arts or jewelry amidst meticulously restored 16th-century Spanish architecture. Almost every Sunday, newspapers in the U.S. ran features praising San Miguel as a romantic destination. Upon reading these stories, the most enthusiastic traveler was ready to sell his worldly goods and move to San Miguel. That was what had happened to us. At the same time, someone visiting San Miguel might be ready to leave after three days.
&nbspDuring our time in San Miguel, my fashion-loving Alice’s entire collection of Christian Louboutin, Jimmy Choo, and Stuart Weitzman shoes hung, unscathed and unworn, in specially-ordered canvas shoe racks. Except for two pairs of Stuart Weitzman strappy heels that were being worn by our housekeeper’s teenage daughter, the rest of Alice's shoe collection was destined to remain unscuffed but not forgotten in the oversized closet. Our little town was not foot friendly. San Miguel’s cobblestone streets called for Sketchers, Crocs or for the truly adventurous, Teva sandals. Anything with a hint of fashion or heel could send the most poised women into acrobatic sprawls with only the cobblestones and gravel to soften the landing. The town’s nickname, City of Fallen Women, was justly deserved. It was, perhaps, for this reason that the small town had two shops that rented wheelchairs, leg braces and ankle boots while the local hospital featured a 24-hour x-ray and orthopedic clinic.
&nbspWhen not tiptoeing across slippery cobblestones in her clogs, my spouse was happy to pilot her cuatrimoto along the town’s notoriously narrow streets. Alice cherished her Yamaha ATV. She loved the bright red color and the soft huffing from the exhaust when she revved the 350cc engine. She insisted that her four-wheeler was the only transportation we needed to enjoy the comforts of our compact town. I had (wisely) agreed with her.....
For two days after placing her order and wiring the money, Alice had kept her choice of vehicle a secret, saying, “You deserve a big surprise.” One morning, Alice caught a ride with her walking buddy to pick up our new vehicle at the delivery agent’s shop. I was left alone on the second-floor patio staring down at the street and trying to guess which passing Suburban (or possibly F-150) was going to stop with Alice in the driver’s seat. An hour passed, and the street below was quiet with only the ‘dirt man’ and his four donkeys in view.
Suddenly, the donkeys sidled over to the broken sidewalks to avoid the black Honda Fit that was spitting dirt as it turned onto our street. It was sharp-looking, with a European-styled hatchback and sunroof. “Perfect for a young couple just starting out,” I thought, wondering if a bass fiddle would really fit inside as the television ad claimed.
&nbspMy eyebrows jerked upwards as the subcompact braked to a stop in front of our house. The driver-side door opened and Alice slipped out from under the wheel. She waved at me to come down. By the time I hit the bottom of the stairs, Alice was entering the front door wearing a big smile.
“It’s all ours,” she said. Meanwhile, I fell to my knees on the tile floor and begged her to tell me this was a prank and that her friend would be along shortly with the SUV.
“Nope,” she said. “This is it, and you’ll thank me for it soon enough.” At that moment, thanking Alice was not extremely high on my list. We both had a ‘Fit’.