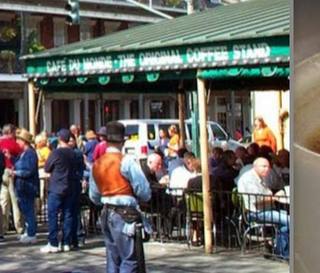 Cafe du Monde, French Quarter. Serving beignets from heaven. Serving coffee from that other place. Guess it must be the chicory. 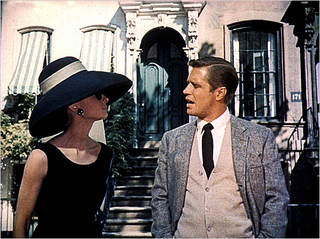 Breakfast at Tiffany's with George Peppard and Audrey Hepburn. On that first night at the Heidelberg Hotel Alice said I looked like George. Only one thing to do? Bought a larger ring. 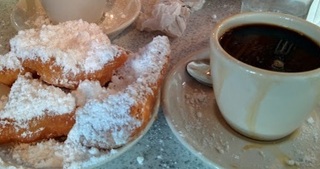 Tuffy and the powedered sugar smashup started an unusual day. Read the story in Chapter 10. 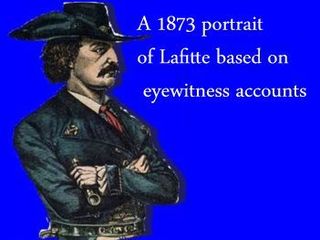 He asked me to be his "second".

Wet, bedraggled and love struck. Audrey, not the cat. The only thing Tuffy and Munchie hate more than water is an empty food bowl. 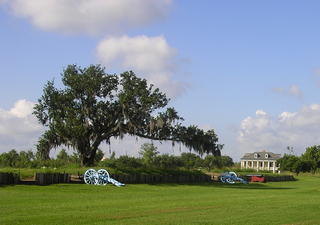 Chalmette - Battle of New Orleans - The Mississippi swamp where a Pirate named Lafitte won a battle and saved the United States.

Chapter 10: Battlefields and Pirates - Breakfast at Tiffany’s — Sorta
“Cats seem to go on the principle that it never does any harm to ask for what you want.” Joseph Wood Crutch

&nbspNo one except Alice ever accused me of looking like George Peppard, and Alice is too short and blonde to be confused with Audrey Hepburn. Nevertheless, just like Holly Golightly, we both like standing up, eating pastries and drinking coffee. And of course, there is ‘that cat.’ Most people remember the opening scene of Breakfast at Tiffany’s in which Audrey Hepburn stands in front of Tiffany’s holding a coffee cup and pastry when Peppard walks by, but not many fans remember the cat. Alice had been in grade school when she and her older sister went to see Breakfast at Tiffany’s. Alice couldn’t forget her negative adrenaline rush when George and Audrey pushed the poor kitty out of the taxi and into the rain. The kitty was a bedraggled waif that was only saved from the terrors of Manhattan when the two star-crossed lovers simultaneously leapt from their taxi into the downpour to rescue the helpless cat.
&nbspCafe du Monde may not look exactly like Tiffany’s in New York, but when you stand on Decatur Street at 8:00 a.m. with a cat carrier slung over one shoulder as you stare at the white-faced mimes and gypsy palm readers across the street while squeezing a scalding cappuccino in one hand and slapping powdered sugar from a chewy beignet off your nose and clothes, the only thing missing is a yellow cab dropping off George Peppard and Audrey Hepburn clutching her coffee and pastry.....

Johnny Horton Sings a Tune
Alice volunteered that until this trip, the only thing she remembered from her college history class about the War of 1812 was that the British burned down the White House. I admitted that most of my knowledge came from Johnny Horton. My mention of the name elicited a muffled laugh from Joseph and a puzzled look from Alice. After he stopped laughing, Joseph cocked an eyebrow and said he was convinced that the Boomer generation derived most of its historical information from music. Every Boomer he had guided that summer could sing half of a stanza of Johnny Horton’s number one hit on Billboard, The Battle of New Orleans.

‘Second’ to a Pirate
I looked up, expecting to see the lattice roof of the patio, but instead saw a stranger dressed in a linen shirt that was unbuttoned at the throat. His sleeves billowed out and snapped at the cuffs. His sleeveless leather vest, buttoned at the waist, was sown with wide lapels and had two small, side pockets. His pants were the soft suede color of maple syrup and the legs were tucked loosely into black knee-length boots. Most striking was the wide-brimmed leather hat with a short, flat crown perched on black hair with shiny ringlets. He was close shaven except for the thick black mustache.
I almost didn’t notice as his right hand reached to his left hip, and in one smooth, practiced motion, he slid a dueling sabre from a scabbard. He extended the blade toward the sky and performed a reverential bow in my direction. His words were accented with an ‘s’ that sounded exactly like the French actor Charles Boyer in 50s black-and-white movies.
“Monsieur,” I heard him say. “Would you accept the honor as my second?”
&nbspMy answer was instant and final. “No, I won’t be your second, and whatever game or prank is being played on me, you should know it isn’t funny.”
&nbspHe apologized for his frankness, and explained that he had spotted the blue-and-white scarf around my neck and assumed I was a fellow countryman. My hand went to my neck. Just then I noticed that I was dressed in clothes similar to this man’s. I had stout boots, coarse, but well-tailored pants and a shirt with the slippery touch of raw silk. A pair of sheepskin gloves lay on the table with a fleur de lis emblazoned on each cuff. I was surprised, when I dropped my left hand to my side, that it did not connect with the knuckle guard of a dueling sabre. The man saw my instinctive reach for a non-existent weapon and shrugged, saying not to be concerned. His retainer would provide me with a suitable weapon, if required.
Before I could respond, the man re-sheathed his sabre, removed his hat, and with a flourish and slight bow introduced himself as Jean Laffite of Barataria Bay....