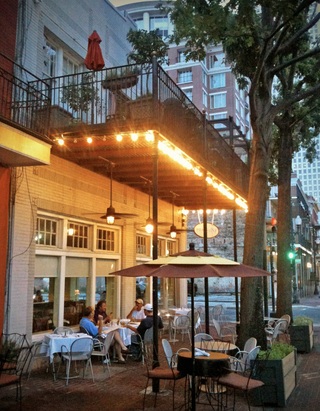 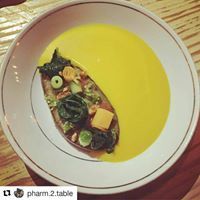 Tuffy saw an Owl at Lenoir's in Austin and went for it. What a mess. Read the story in Chapter 2.

Alice says "never judge a book by the cover." Especially in Austin. Was she ever right on Foreign and Domestic.We agreed with The Food Network that called this spot "a culinary wedding of flavors." Crispy Pig's Face and Black Pepper Gruyere Popovers was just the beginning. 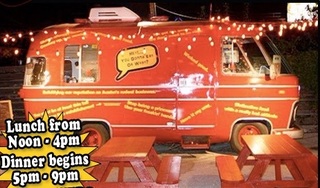 Hey Get in Here and Eat pop-up food truck in Austin. Monte Cristo's that make ya wanna get in there and eat. 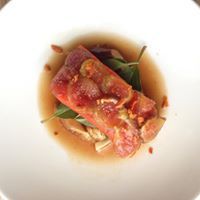 Small plates. Big Taste. Lenoir does pharm to table like no one else. Order one or two from Field, Land and Sea and Dreams. Dine like the Emperor.

The Secret is In the Sauce 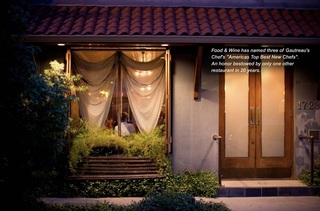 A Secret spot with a Secret Sauce

Chapter 9 - Breaking Bread at Gautreau's in New Orleans“After scolding one’s cat, one looks into its face and is seized by the ugly suspicion that it understood every word and has filed it for reference.” Charlotte Gray, character by Sebastian Faulks.

&nbspA dozen tables were set in the open space that was once the floor of an uptown pharmacy. Brentwood chairs were pushed under the white-clothed tables set with crystal water glasses and sterling place settings. Candlesticks in cut-glass holders burned in the center of each table. There was no visible overhead lighting, but the room was sheathed in an incandescence spilling out from the rope lights hidden behind the cornices. In the back arranged like soldiers were bottles of cabernet, pinot and Syrah. They lined the old pharmacy-shelves-turned-bar. Such detail to our surroundings boded well for our dinners.
&nbspAlice turned to me and whispered, “Gautreau’s is not a restaurant. It’s a dinner party. A very, very elegant dinner party.”
Swathed in a Parisian elegance, the room was remarkably small. There was no bar, only bar shelves. Once inside the front door, guests are in the restaurant. Looking around at the sparseness of the space framed into the plushness of the setting, I understood what Lincoln had meant about tardiness being a problem of logistics. There was no waiting area. There was no bar. Appointments out of schedule would mean the tardy would be standing around inside, literally looking over the shoulders of fellow diners or standing outside on the sidewalk, waiting for the maître’d to open the door.
Chef pulled out Alice’s chair and bent over. I heard her whisper that she had heard about our intoxicated cat. Alice looked at me and we both followed Chef’s glance toward the back corner of the pharmacy bar where a tuxedo-clad man (Lincoln) stood with what could only be a Kentucky Mule copper mug on top of his tray. He had told Chef about our ‘dining and driving with cats’ as well as the day’s mishap with Tuffy and the controlled substance.
&nbspChef told us she had made the trip from Wilkes-Barre to New Orleans in a Fiat 500 with three cats. After fourteen hours with three felines scratching and pawing for attention, she had wished she had had some pot. We laughed and asked whether she meant for the three cats or herself?
“What do you think?” she answered, laughing, and told us that cat lovers are always welcome at Gautreau’s.
“Tonight,” Chef Susan said, “we are offering a chance to experience our menu by serving you a few cat-sized samples.” Wondering what ‘cat-sized samples’ might actually be, we waved at Lincoln as he crossed the room bearing a surprise for Alice.
“One Kentucky Mule.” He beamed as he set down the copper mug in front of her. “Prepared exactly how you like it.”
&nbspMy eyebrows shot up and I could not restrain myself from saying, “No Way.”
“Way,” he said, clasping his hands as he spoke the three sacred words: “Pappy Van Winkle. ”
&nbspAlice now took up the chant, “No Way!”
“Way,” he repeated, as Alice raised the copper cup to her lips and sipped a taste of the spicy nectar.